skip to main | skip to sidebar

The good, the bad and the ugly

This past weekend was momentous in the annals of Park history, as three events were accomplished in just two days' time. There was an inconvenience that threatened to muddy up the proceedings and give us the blues, but since 'ark didn't let it get to him -- and he was the one majorly discomforted -- we will bypass that and get to the good stuff.

Now over the past weeks, I've gotten to introduce 'ark to people, places and things he hadn't experienced before. This week, it was going to happen twice to me. First on the docket was Popa Chubby, who I think should deem himself Pop A. Chubby if he doesn't want people to call him Pope-a Chubby as much! 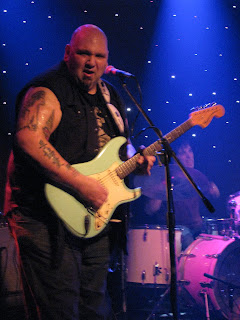 But frankly who cares what a guy's name is when he can play guitar like that. But first thing's first. There were special guest Parkies for the show -- namely lovely Ellen and hubby Carmen. Ellen's known as journeygirl in Eric Clapton Access circles, so I deemed them journeycouple. We found out that all of us were already planning to see Zucchero at Carnegie Hall the next day -- small world.

As we were seeing the show at the famed Mexicali in Teaneck, N.J., we thought we'd meet up for dinner there. Wasn't quite as impressed by the food as we thought we might be ... but the banana chimichanga was a delight, despite its visage on arrival. Flowing chocolate will do that to a dish.

Less of a delight was the opening band. I had my doubts about them when they opened with "How Sweet It Is," but totally lost interest after that. As did Ellen. At one point, we accidentally bonked heads and thought that to be more infinitely interesting. The cover band definitely had some Grateful Dead leanings, and as we do not, their set left us at least comatose en route to the flat line.

But none of that mattered, cause Popa came out and plugged his guitar right into our souls. The result was a couple of hours of searing rock blues. When it comes to Hendrix covers, I'm as discriminating as a few thousand Fab Four fans at a Beatles convention, but I was totally knocked out by "Hey Joe." The solos were strong and not repetitive and it seemed like he and his crew coulda gone on forever. I know dozens of us would have stayed. 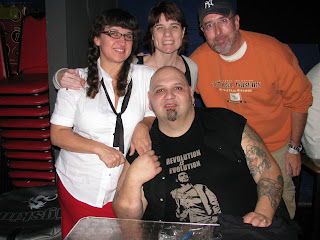 But after a couple endings and then a final finale, the show did end. We waited to meet Popa and his wife, Galea -- who had not only held her own when she came on stage for a few songs but even added more to the night by doing so. They were both as cool as they could be and we posed for the first Park-band photo.

When 'ark first brought up Saturday's Zucchero show, I said uhhhh we were going to Devils-Rangers at the Garden. Turned out the preseason hockey tilt was at 1 p.m., so we were able to do both. This marked 'ark's first time at an NHL game and I gave him the whole afternoon to ask all the stupid questions that he won't be able to query when the games mean something.

The Devs quickly took it to their rivals, with my man Patrik Elias potting the first goal within 90 seconds and another one by Dainius Zubrus a couple minutes later. Elias got another one later and I thought I might FINALLY see my first "hatrik" but nope, another two-goal Patty game for P.

And how did 'ark hold up? Well he seemed to getting into it and gaining some understanding, even sitting on the edge of his seat at some point. And then the funny thing... the third period ended and I got up to celebrate and, well, 'ark sat there waiting for a fourth period. Hahaha. He was wondering why all the Rangers fans would leave with 20 minutes to go.

I usually stick to the entertainment portion of the program but the visit to the legendary Ruth's Chris Steak House should get some mention, just 'cause the meal was so damn good!

And then the capper, Zucchero. Two days after his birthday, the Italian rock/blues/the kitchen sink singer drove the crowd into a frenzy with his passion, verve and talent. There was rockin' at Carnegie Hall that probably hasn't even been seen at the Garden in some time. People getting into the music and just enjoying it without stepping on each others' toes. And you don't even have to understand every word to feel it down to your own digits. (Editor's note: Will add photos for this ASAP.)

So due to those circumstances beyond our control, we may be Parkless this coming weekend, but in two weeks, we'll have a verrrry special guest and the first of two Lindsey Buckingham shows that I'm just racing my motor about as we speak.
Posted by Pai at 4:48 PM

Here's an email from Moma:

Paige and Mark!
It was a pleasure to meet you.
Thanks so much for coming out and supporting live LOUD music.
Galea

Pai
I'm a writer-turned-editor who really enjoys making the most out of life. I know it just can't be all about the paycheck.